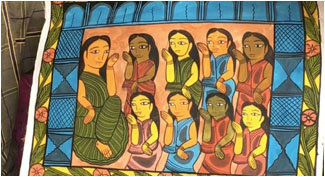 The Contemporary in the Traditional: West Bengal Pattachitra 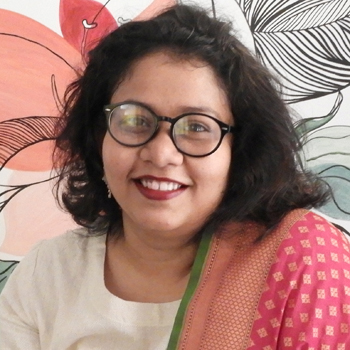 The Poetics and Politics of Indian Folk and Tribal Art

Patachitra or scroll painting is a well-known folk art tradition that is practised by artists in various parts of the state of West Bengal, India. A scroll painter is known in West Bengal as a Patua, Chitrakar, Patikar or Patidar. They were primarily wandering artists who would go from door to door carrying their patachitra scroll paintings.  The patuas would sing songs while unrolling the painted scroll and in return they were given some money or food. The songs composed by the patuas explained the story illustrated in the scroll. For a long time, these patachitras were a source of entertainment as well as a means of communicating social, cultural and political information through visual art and music. The villagers in Naya, West Midnapore have a story about the origin of these scroll paintings. It is said that about two thousand years ago, there was a demon that lived in a cave near the village and devoured humans. Worried about losing so many lives, the villagers went to a wise man who advised them to make a giant mirror and install it near the entrance of the cave.  When the demon saw his own reflection, he was intimidated and started t...

art, Craft, pattachitra
This is a preview. To access all the essays on the Global InCH Journal a modest subscription cost is being levied to cover costs of hosting, editing, peer reviewing etc. To subscribe, Click Here.